The Dialogue of Hamlet with his Conscience

—She’s on the bottom, with the silt
And water-weeds . . . To sleep with them
She left,—but even there, finds no sleep!
—But I loved her
As forty thousand brothers
Could never love her!
—Hamlet!

Rock and rock me, starry boat!
My head is weary of breaking waves!

For too long I’ve lost my moorings,—
My head is weary of thinking:

Lay me out among grasses and pine-needles,—
My head is weary of wars . . .

Until, you’re undisturbed by anything now,
—Only the tree riffles its branches—
As if you’ve fallen into an icy crevasse—
Into my breast, that hurt itself so over you!

From the treasure house of images
Here you are—at random—my guesswork:
As if in a cut-glass coffin, in me, you
Sleep,—in me, as if in some deep wound.

You sleep,—this icy aperture is narrow!
The ices, jealous of their corpses:
Ring—armor—seal—and girdle . . .
With no return and no password.

Widows, why bother to curse Helen!
Isn’t Helen’s lovely Troy
Burning! To the crevasse’s icy, deep
Blue bottom, you sink to your rest . . .

Having taken you in, as Aetna
Did Empedocles . . . Fall asleep, dreamer!
And tell your people, it avails them nothing:
My breast does not give up its dead.

I’ll be late to our fixed
Appointment. Having stopped spring
In time, into the bargain—I’ll be grey.
You’ve fixated too much on this!

How long we live on this earth! This thicket—
Of blood! and every drop—a backwater.
But always at the edge of the brook
The face of Ophelia in its bitter grasses.

She, who hoped to taste passion, only
Swallowed silt!—Lies like a sheaf on the gravel!
I have loved you sublimely:
I have buried myself in the sky!

However deep your inclination—
The sky—is a fathomless vat!
O, for such a love it’s
Early yet—to not feel wounded!

Life is alive with jealousy!
Blood lusts to stream
On the ground. Does a widow
Give up her right—to the sword?

Life is alive with jealousy!
Loss is consecrated to
My heart! Does grass
Give up its right—to the scythe?

The secret thirst of grasses . . .
Every new shoot says: “crush me” . . .
Having dispensed with bindings,
My wounds remain—my own!

And until You suture us
—I bleed!—until You press my wound—
Early yet for the frozen reaches
Of the Underworld! 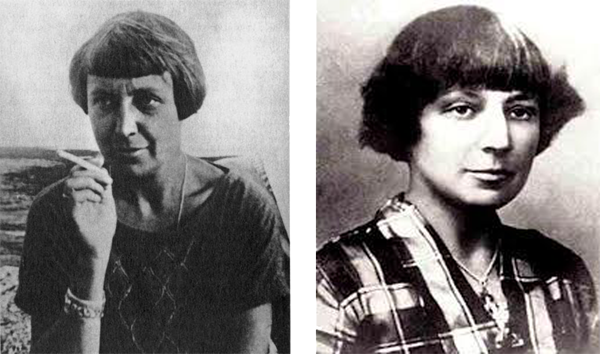 Marina Tsvetaeva was born in Moscow in 1892 and began to publish in her teens, to multiple good reviews by Russian literary critics. She was a working contemporary of Anna Akhmatova, Osip Mandelstam, Boris Pasternak and Rainer Maria Rilke, all of whom were important to her as rival, lover, correspondent and mentor, respectively, and as they should have been, in her view, from time to time, as her views of their roles in her life were changeable.

Tsvetaeva left the Soviet Union in 1922 to reunite with her husband after a four-year wartime separation during the Russian Revolution. She lived as an exile in Berlin, Prague and Paris through 1939. The period of exile in Prague, lasting from August of 1922 to May of 1925, was a very productive period, with new poems arriving every other day or so, or sometimes two poems a day, until her son Georgy (nicknamed Mur) was born in 1924, when the poems slowed to a relative trickle.

These particular poems were written in Prague between June 5, 1923 and June 19, 1923. The probable addressee of these five poems was a young literary critic, Alexander Bakhrakh, to whom she wrote a number of unrequited emotional letters that year, and about whom she wrote the prose piece “Bulletin of My Illness.”

Ophelia was a frequent “mask” for Tsvetaeva’s personae during this time.

“The Seafarer” should be read with Tsvetaeva’s first name in mind – “Marina,” which, of course, reads as “the sea” in Russian, as it does in English.

In this unrequited relationship of letters, as in many of her emotional relationships, in the flesh or otherwise, Tsvetaeva was supremely and powerfully possessive, controlling the “role” of her partner in her imagination, frequently calling on myth and incantation to write the script.

In real life, her spirit struggled to live in the small villages surrounding Prague where she found herself to have washed up into considerable poverty with her young daughter and dependent-student-war-veteran husband, and in 1924 the addition of an infant son. While living in and around Prague, the family was supported by Tsvetaeva's writing and small refugee pensions from the Czech government, supplemented by direct gifts from Czech literary friends like Anna Teskova. By spring of 1925, Tsvetaeva moved on to Paris, where, in 1928, these poems were collected into her final published book of shorter lyrics, After Russia.

Russian critic Simon Karlinsky, also her biographer, offers this judgment of her work of this period: "If we were to select the verse collection by Tsvetaeva in which her poetic craft reaches its highest peak, and her human and poetic stature its more awesome dimension and sweep, we would have to choose Posle Rossii [After Russia]."

In 1939, Tsvetaeva and her son chose to follow her husband and daughter back to the Soviet Union. Her husband, Sergei Efron, was executed shortly afterward; her daughter, Ariadna (Alya), was also arrested and committed to a labor camp. Her teenage son was unsettled and unhappy in the USSR, and later died as a soldier in World War II, all too shortly after Tsvetaeva hanged herself in 1941, in Elabuga, where she and her son had been evacuated to the safety of dire poverty. At the time of her death, she was 48.

I began translating Tsvetaeva in about 1978, upon the recommendation of Russian poet Joseph Brodsky:

It has been a great privilege to try to translate Tsvetaeva over what is now nearly forty years of time. My approach to translating her has remained what it was when I began with her early cycles, “Mileposts I and II.

My approach to translating Tsvetaeva has been to produce an accurate literal version that is not painful or awkward for an American speaker to read. Early in the process, I looked up each word in the Oxford Russian-English dictionary and noted each meaning of the work and every idiom in which it is reported to be used. This part of translating has the same attraction for me as crossword puzzles do for other people; it is like knitting, or doing tax returns. It produces the calm high of word or number intoxication. My purpose in doing this is to obtain, by osmosis, a sure feeling for the texture of the particular language Tsvetaeva has chosen, the texture, if you will, of her diction. This slow acquaintance and the notes – to which I refer back – aid me in making a sure choice among the various meanings for each individual word.

I make an effort to keep the material of a single line confined to a single line of translation – this, to preserve the pace of the original as much as possible. This is not an original idea at all. While a student at Reed College in Portland, Oregon, I traveled often to Vancouver, Washington to visit Mary Barnard, the wonderful translator of Sappho. It was she who convinced me of the value of this general rule of fidelity and pointed out to me how preserving the pace of the original was useful in reproducing its tone. Think of how speeding up or slowing down a film introduces an overall comic or lyrical effect. In the interest of maintaining this fidelity to pace and tone, I try not to omit, or to pad. Tsvetaeva can be very abbreviated and abrupt in the original. She would suffer from “explanation added.”

I did not attempt to translate in rhyme or meter, although Tsvetaeva’s poems are rhymed and metered with the same fresh and surprising closeness of, say, Ezra Pound in “Hugh Selwyn Mauberly.” It has been observed that rhyming at least is much easier to do in Russian than in English. In part, this is due to the fact that Russian is an inflected language. This inflection also results in a greater variety and syllable depth of rhyme and of assonance than in English – a rhyme might extend through as many as three syllables, and an assonance might be found upon a stressed vowel or vowel sound three syllables deep into the rhyming words. So, as you read, you must think of all this as missing. (From Translator’s Afterword, Willow Springs, No. 20, Spring 1987, to my translation of Tsvetaeva’s cycle Mileposts II.)

For these recent translations from After Russia, I have followed the same procedures, with the same aims, as foundational work to finally read Tsvetaeva’s poems for myself. In these translations, I have felt a bit more secure in adding obvious possessives and pronouns (not always explicitly needed in Russian) for myself, to support my reading of any given poem as a whole.

So, these translations arise, are thrown off, as the residue of my reading.

I trust that the residue of my reading is the gift to my readers in English, who might otherwise have no opportunity of coming to hear anything of Tsvetaeva’s own (still hidden) Russian voice.

This work is licensed under a Creative Commons
Attribution-NonCommercial-NoDerivatives 4.0 International License
Note About Contributor(s)

Marina Tsvetaeva (1982-1941) was a Russian poet, born in Moscow, much admired by Joseph Brodsky, who stated in 1978: “Well, if you are talking about the twentieth century, I’ll give you a list of poets. Akhmatova, Mandelstam, Tsvetaeva (and she is the greatest one, in my view. The greatest poet in the twentieth century was a woman.)” The poems translated here were written while Tsvetaeva was living in exile in Prague, where she lived from 1922 to 1925, before moving on to Paris. She eventually returned to the Soviet Union just before World War II, where she committed suicide, having lost her husband to the KGB, believing she had lost her daughter to the Gulag, and leaving behind a teenage son, who did not survive military service in the war. Her daughter, Alya, emerged from the Gulag late in life and did much to preserve her mother’s legacy.

Mary Jane White is a poet and translator from Amen Lake, Deer River, Minnesota. She earned an MFA from University of Iowa Writers’ Workshop, received NEA Fellowships in 1979 and 1985 in both poetry and translation, and was twice awarded writing scholarships to Bread Loaf (1979, 2016) and to Squaw Valley Community of Writers (2006). Her book Starry Sky to Starry Sky (1988) is available from Holy Cow! Press, and contains translations of Marina Tsvetaeva which first appeared as a cover feature in The American Poetry Review. Mary Jane White’s recent Tsvetaeva translations include: New Year’s, an Elegy for Rilke, a chapbook from Adastra Press (Massachusetts); “Poem of the Hill” in the Summer 2007 issue of The New England Review; “Poem of the End” in the Winter 2008 issue of The Hudson Review, reprinted in two anthologies, From a Terrace in Prague, (Prague 2011) and Poets Translate Poets, (Syracuse 2013).